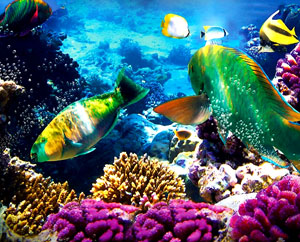 You surely have heard that the Australian government agreed to a significant development and enlargement of the country’s seaport of Abbot Point, which will end up becoming one of the world’s most significant coal ports. Building the enlargement of the port will result in removing some three million cubic meters of waste from the waterways, and this sludge is going to be dumped in the ocean close to the World Heritage site of Australia’s Great Barrier Reef.

If we would dump all this waste on land, just to give you a notion of the dimension of this dredging, the enormous mountain of sludge would be bigger than Egypt’s Great Pyramid of Giza. The Great Barrier Reef generates every year more than five billion dollars, and is one of Australia’s finest tourist attractions. Dumping such an enormous pile of dirt into the waters of this beautiful marine park could really threaten this unique region’s World Heritage listing.

But there still is time for change, and there are better alternatives to get rid of the waste! The Dutch corporation TenCate developed a new technology that uses geotube containers to dewater and take care of sludge coming from waterways. The revolutionary system uses so-called Geotubes which are tubular-shaped geotextiles that allow water to seep through, These geotubes are used as a ground breaking solution for dewatering contained waste from canals, seabeds, ports, and rivers.

The procedure is relatively simple: the waste is put into Geotube containers, and ecologically risk-free polymers are then combined with the sludge. This makes the solid material bind together and separates the water that is allowed to seep out as the solid waste is safely secured in the geotubes. This way the solid waste can be easily removed and disposed of, or moved for further treatment.

This revolutionary technology is still relatively unknown, although it had been used in over two thousand locations worldwide, and this could possibly explain why absolutely no one talked about this solution as being the best alternative to dumping the waste in the waters surrounding Australia’s Great Barrier Reef. Let do our best to save the reef and get the word out about this solution, so share this wonderful infographic and let’s see if we can protect this unique marine park.