Basketball player Mr. Ware suffered with a broken leg during the final on Sunday. His leg was severely broken that the skin got punctured. After his injury everybody including his coach broke into tears and Ware said he will be okay, just win the game for me, and surprisingly the team won the game.

After two hour surgery, experts said that Mr. Ware will be back on the court soon. It will take almost a year to get recovered from that severe injury. The devastating incident happened while the game was on. Mr. Ware just landed on his right leg and his bone got broken severely. Momentarily he started saying he will be good, just win the game for me.

Even Rick Pitino, the coach of Louisville got emotional and broke into tears after seeing his player injury. However the team regrouped and goes onto to win the game with 85-63 over Duke Blue Devils. 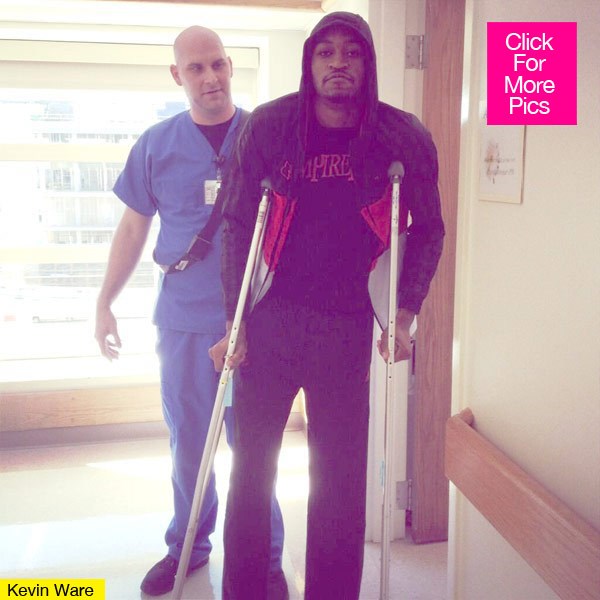 Before admitting in the Methodist Hospital, Kevin stayed strong. After the two hours of surgery doctors tried to put things properly where his leg was broken at a strange angle. He woke up in the morning knowing that who country is praying for him. He became the overnight sensation and everybody wanted to know about him.

Mr Ware is recovering well from his injury. His news and progress have been in the newspaper, magazines, and television. Even on the internet and social media, featuring Mr Ware recovery news. A slew of media personnel wanting to ask Mr. Ware, what had happened? They were also asked about his experience.

According to Ware, there are many names who have already asked about him. Those names are Charles Barkley, Keving Durant, Kobe Bryant, and others.

The injury was so dangerous as 6 inches of his leg bone came out after tearing the skin. According to Pitino, Mr. Ware is a special man on the earth and he never had seen people like him.

Once ware got injured, he said that win the game for me hence after the group member get inspiration and wanted to do something for the man. In the Indianapolis the team got the victory with 85-63, was something amazing and incredible.

Once the incident happened staff put the towel on Ware’s leg so that people can’t see how gruesome that injury was. And away from Ware, his teammates were on the ground crying for him and praying for him.

After a long delay, Mr. Ware was taken to the hospital and carried on the stretcher. The crowd applauds the effort of Mr. Ware. After hearing the message from Ware, that win for me, the team member was decided to put all the effort to provide hope for Ware.

They played a fantastic game and win the game for Ware. The news was all over the internet and people treated about him with his picture and with the trophy. Teammate said that we did fir Ware. He is recovering quickly from his injury and hoping to play again next year.