Most states have laws against distracted driving, which prohibit distractions such as text messaging and emailing. If you’re typing on your MP3 player, this could also be included in these laws. Aside from the tickets you may face, the point is that it’s not safe. No one wonders if it’s legal to set your boots on fire while you’re wearing them, or if it’s safe to play chicken with moving vehicles. The point is this – if you have to ask, it’s probably not a good idea. 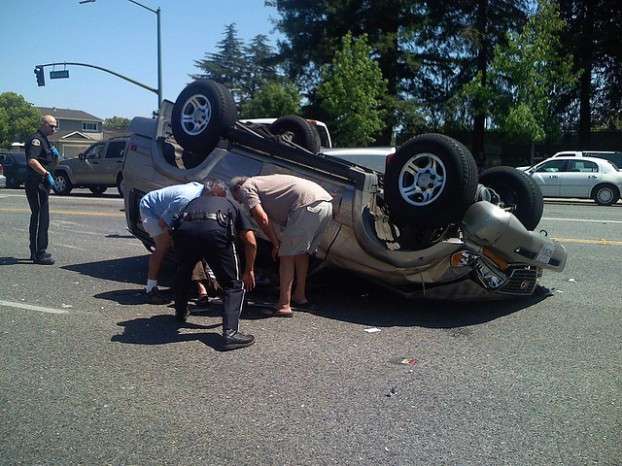 Operating an MP3 Player While Driving is Not Safe

We’re discussing operating an MP3 player; not listening to one. Hooking your MP3 player to your car stereo and letting it play won’t distract you. Constantly searching for songs and/or typing in choices will. Any apparatus that takes your attention from the road is dangerous. Period.

According to Distraction,gov, you’re engaging in risky behavior whenever you take your eyes off the road, your hands off the wheel or your mind off your primary task – which is driving safely. Distracted driving resulted in 3,328 distracted driving-related fatalities in 2012, and more than 420,000 people were injured. Don’t take the chance of becoming a part of either statistic. Set your MP3 playlist before you start driving and leave it until your car is in park.

Choosing a song from your MP3 player is comparable to texting. Sending or receiving a text takes an average of 4.6 seconds. If you’re driving 55 MPH, taking your eyes off the road for 4.6 seconds is the equivalent of driving the entire length of a football field … blindfolded.

Your vehicle is a multi-ton machine that deserves your undivided attention. In the U.S. alone, more than 32,000 people will killed in auto accidents in 2011, despite continuous advances in vehicle safety. There is no substitute for focused, safe driving. When you’re behind the wheel, your concentration is essential. You owe it to yourself and to those around you to give all of your focus to the task at hand. Injuring yourself would be terrible enough, but living with the guilt of having injured – or taken the life of – someone else would be an awful burden to bear. Make sure that you don’t have to carry that burden by being a safe and defensive driver.

Today’s cars are much “smarter” than just a few years ago. Features include being able to sync your phone for hands-free phone operation and steering wheel-mounted radio and MPs controls, The Jeep Grand Cherokee Overland package, for example, even offers an internal hard drive which allows you to “store” all of your MP3s and CDs to your vehicle’s library, which is also voice-controlled. Asking the car to “play ‘Baby Got Back’” is so much safer than searching manually for the same MP3 and allows you to be a safer driver.