Perhaps the single most commonly-asked question of all experienced by speech and language therapists every day is that of how exactly it’s possible for the parents to play a more active role in the speech development of their own child. There’s absolutely no doubt in the minds of parents that strong speech and language development is incredibly important for any person’s future and that when and where any problems begin to appear in any way, they should be addressed as early as possible.

Of course, identifying what constitutes a genuine problem is something that’s much easier said than done as it’s perfectly natural for every child across the board to encounter all manner of challenges when picking up new language skills for the first time. What’s more, all kids are different and all develop at very different rates, which in turn makes it very difficult to separate what’s ‘normal’ from what may signal a problem on the horizon.

The good news however is that parents can indeed help give their child the very best chance at developing strong language skills for life with a few simple tips to implement on an everyday basis. 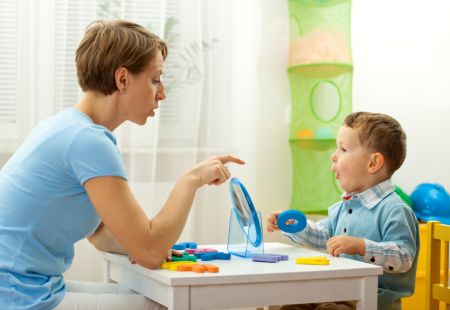 First and foremost, nothing in the world is quite as effective as simply giving your child as much time and attention as possible on a consistent basis day in and day out. We all know that time doesn’t grow on trees and it’s never going to be possible to give any child 100% your time and attention, but at the same time there’s so much to be said for solid and healthy interaction at all times. It’s a simple case of the more you talk to your child and the more you encourage them to talk to you, the more exposure to language they get and the more opportunity they have to practice. What’s more, constant and consistent interaction with your child will allow you to gain a better insight into whether or not there are any problems beginning to manifest.

One of the very best tips any parent can receive when it comes to nurturing their child’s development is that of making every last thing you do with them as much fun as it can possibly be. The reason being that when and where anything starts to be interpreted more as a task than a fun activity, the child will begin putting up their defences and show reluctance to take part. By contrast, the more enjoyable any given activity is, the more they are likely to get out of it. It’s the same with adults – if you enjoy any activity across the board, you’re far more likely to master it than you would be if you hated doing it.

Progress Should Be Rewarded

It’s a rule that applies to so many areas of parenting – especially when it comes to nurturing a child’s most important skills and development. The idea in this instance is to not only make sure that the child feels special and as if everything they get right is something to be celebrated, but also to associate efforts with fair rewards. As such, every time they make any obvious or even very subtle progress with their speech and language development, be sure not to hold back with the praise and rewards.

As soon as your child has begun making moves away from non-stop baby talk, it’s a good idea to begin encouraging more accurate speech when and where possible. It’s a case of correcting their speech in order to guide them in a positive direction, but being sure to do so in the kindest possible way. For example, rather than telling them outright they got something wrong, it works much better to repeat what they said incorrectly in the correct manner a few times over. This will lead to them instinctively assimilating what it is you’re saying to them and ultimately learning the correct way of saying the word/phrase.

Last but not least, never overlook the way in which there’s so much entertainment out there’s that’s been specifically designed to be as educational as possible for kids of all ages. Speech and language in particular can be nurtured in a big way by taking home educational movies, TV shows and any other kinds of media that have been designed to be useful as well and enjoyable for kids.