Television beds have seen a revival over the past couple of years and nowadays almost every major bed supplier will have a division dedicated to this blend of technology and furniture. It appears that there must be demand for this neat invention but are they here to stay or is it just a passing fashion? 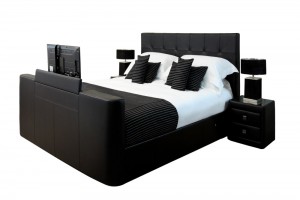 Indeed television beds have been around for many years. We may all remember seeing them for the old fashioned deep televisions, however at that time this truly was a luxury product and personally I wouldn’t have known where to buy one. Because of the depth of old style television sets an obvious problem existed and admittedly it did look completely unnatural to have a foot board that was a couple of feet deep and for that reason a bit of an oddity.

TV Beds give an Element of Surprise

New extra slim TV’s mean that the television is completely concealed in a hidden compartment. The fact that it is completely hidden provides an element of surprise that appeals to your typical gadget lover. For many this could be seen as a space saving device but at the same time if you are to mount your TV on the wall it wouldn’t take up any space either.

What could be argued is that the price of a television bed isn’t that much more expensive than the price of a normal bed so for that reason it becomes a realistic option for many. At the moment it is still quite a rare product to own and that’s probably why the odd gadget lover wants one but if it does become more popular, similar to most new fashions it may become un-cool.

Scientists believe that television should not be Watched before Bed

There is also a scientific reason as to why a television bed may not be such a great idea. Research shows that watching TV and having an exposure to light before bedtime may result in it taking longer to fall asleep. Therefore is combining the two really a practical idea? It could be argued that it’s not going to change a person’s habit as if they wish to watch TV in bed they would have done so anyway, regardless of whether the TV is in the foot board of the bed or displayed on a wall.

New variations and improvements are now starting to arise. Multimedia TV Beds with built in speakers in the Headrest and believe it or not a Sub Woofer beneath the mattress are beginning to enter the market. It’s probably not too long until they incorporate a microwave and fridge! Then you really wouldn’t have to get up out of bed. Not surprisingly these new multimedia TV Beds are being targeted towards the children’s market and this can be seen as most multimedia beds only come in the single bed size variety. If a parent is to purchase this item for there off spring it may be sending out the wrong message, it may also be such a great experience for a child that it could encourage them to spend more time in bed playing computer games and watching TV. As parent if you did make this purchase for your child it may be difficult to argue that they are spending too much time in bed.