Wasps and bees are often mistaken for one another. Both insects can give painful stings. It is important, however, to differentiate between the two and to be able to give and administer the proper sting treatment and pest control. 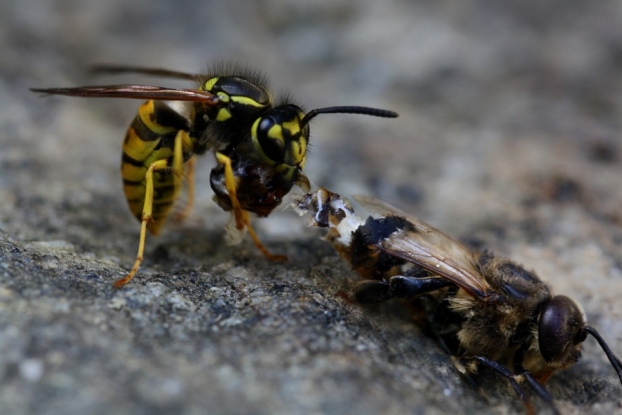 Both wasps and bees fall under the Hymenoptera order of insects, but their physical characteristics are different.

Bees measure 2.54 cm on average. Some bees have totally black bodies; some are black or brown with either orange or yellow patterns. Unlike wasps, bees are also hairy.

On the other hand, wasps have smooth and shiny skin. They may have bright colors with black and yellow patterns.

A honey bee can only sting once, then die. This is because the stringer is ripped from their thorax after they sting a prey, which ultimately causes their death. Other bees can sting multiple times. A wasp can also sting multiple targets. Bees are less aggressive than wasps. Bees will attack when they are provoked. They will use the poison in their stingers to protect their hives or themselves. Wasps are the more aggressive predators between the two.

Generally, bees and wasps are not aggressive insects. They will just sting you if they feel threatened or they are defending their colony. Wasps however, are easily provoked compared to bees.

Bee colonies usually have populations of over 40,000. Wasp colonies, on the other hand, have a smaller population, usually not more than 10,000.

For the bees, the worker bees create and maintain the beehive for the colony. A bee colony has one Queen, many worker bees, and drones. A beehive is made of densely packed matrix of cells made from beeswax. It is where bees store their food and brood.

In the case of wasps, it is the Queen who builds the nest for the colony. A wasp nest is usually made from a paper-like substance from wood pulp. Sometimes, nests can be simple burrows excavated, or constructed from mud.

Bees are pollinators, which means that they collect pollen and sip on nectar. Bees are usually found in areas where there are flowering plants.

Wasps are predators who feed on other insects, such as flies and caterpillars. Sometimes, wasps also sip on nectar.

A colony of bees or wasps can take residence in your yard, which can pose some serious threat to you and your family. If you or a family member was stung by a bee or wasp, do not take revenge in your own hands. Call a reputable pest control company to take care of your needs, safely and effectively.