Antalya, a city situated on the paradisaical Mediterranean coast of Turkey, is quickly growing into a favorite vacation destination. Not only it is the country’s largest international sea resort, but it was also the third most traveled-to city in the entire world in 2013, coming in just after Paris and London. With so many visitors, the question many people might have is: What is there to do in Antalya? After procuring Turkish visas for you and your family or friends, you can explore all of these unforgettable opportunities and more.

The Antalya Golden Orange Film Festival has been held in Antalya since 1963, and is Turkey’s premiere film festival. As such, it is an opportunity for any film goer to watch international and national films in a unique Turkish setting.

The Aspendos International Opera and Ballet Festival have been a fixture since 1994. As its name suggests, a myriad of international opera and ballet companies are featured at the event, which is held in June and July. For any lover of culture and fine arts, this festival is a must.

The Mediterranean International Musical Festival occurs annually during the last week of September. European musicians travel to Antalya for this event. This festival also offers a great opportunity for those interested in culture and history to experience the traditions of Turkey firsthand, as folk dances and music are incorporated into the festival.

2. Watch and Play with the Animals

Beach Park’s Aqua Land is a water park that offers a fun time for both young and old. But it’s Dolphin Land that offers the truly enticing prospect of swimming with dolphins and watching their animal shows. Animals also include sea lions and white whales.

Antalya Zoo houses lions, grizzly bears, monkeys, tigers, and much, much more. This small zoo has an inviting atmosphere and cheap tickets. 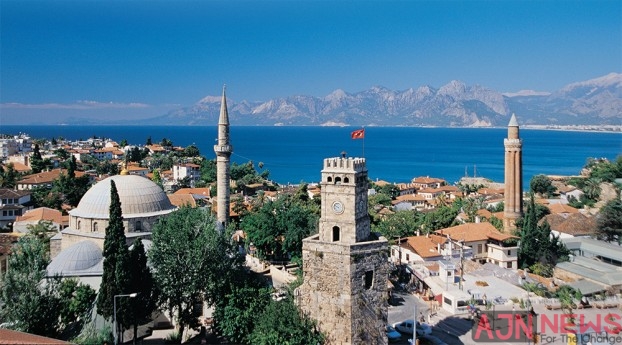 As a Turkish city, Antalya’s food is rich and diverse. Its signature dish includes items such as garlic, boiled beans, Tander Kebap, Saksuka, and of course olive oil. A local treat is Tirmis, or the boiled seeds of the Lupin. Fish, various spices and herbs, and nuts also feature heavily in Antalya’s cuisine. There are many restaurants, both fancy and inexpensive, to choose from.

At Duden falls, you can gaze upon a beautiful waterfall. At Termessos, you can hike a national park that is in one of the best-preserved locales in all of Turkey. At Perge, you can explore ancient ruins that tells of the city’s long and complex history. In Karaalioglu Park you can examine the exotic fauna and flora while escaping the city for a bit. Antalya’s geographical landscape offers a variety of ways to spend your time, whether it is hiking, swimming, boating, walking, biking, or more.

The Antalya Archaeological Museum is a gem of a museum, one that allows any visitor to more fully understand the culture and history of both the country and city. The museum features priceless items including icons, religious statues, photos, documents, coins, stamps, and newspapers. It is widely recognized as one of Turkey’s most significant museums.