Want to own the tiniest yet awesome car in the world? Most people in the world opt to buy the coolest car, while a very little number of people want the tiny cars. But some cities’ streets can only accommodate tiny cars, and some might just not need a big car, or might not be able to afford one. For them especially, Tata has released their (and the world’s as well) tiniest car in the world which is Tata Nano. Now we are going to talk about a special edition of the Tata Nano which is CX SE.

This special edition is essentially the basic version with some added features which is worth 25 thousand rupees. You get these for free; not entirely. Definitely you pay for your ‘additional gifts’. 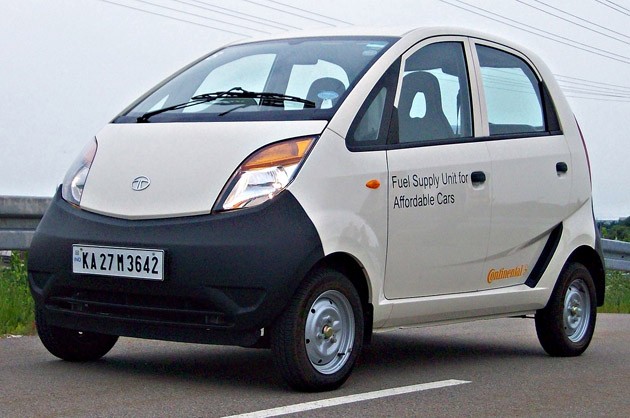 So what do you get from this Special Edition?

The body graphics. Yes, the first thing you are going to notice from the outside is the body decals on both sides. They are like the ones you get to see in the racing cars, though Nano is not used for racing purposes but they still look good on it. And unless you screw your number plates to the c pillars, they’re going to have a ‘Special Edition’ board there.

The wheels now come with allow rims, while the non-special editions come with the dull looking rims. Now this alloy rim gives the car a sportier look.

Tata has put some cushions inside the glove panel to reduce engine noise. Although they’ve put hidden inside but you can see them when the lid is opened, and the look is not impressive. The opening latches are unimpressive too, could have been far better if only Tata has put some real efforts in them, it wouldn’t have affected the budget.

Being an extremely cheap Diesel car, we didn’t expect any entertainment features inside. But it actually has a music player installed which can play CD music, has AUX and USB support. There are two speakers in the front door. The sound quality didn’t meet our expectation; however, it’s a cheap set anyways. The music player model is ‘Cupertino 220’.

You may want to keep some facts in mind about Tata Nano CX special edition.