In the wake of such school tragedies as Columbine and Sandy Hook, the need to protect children in school has never been greater. As security becomes an issue on everyone’s mind, many school systems are re-examining their security systems and procedures to ensure students, staff and visitors are kept safe and sound. 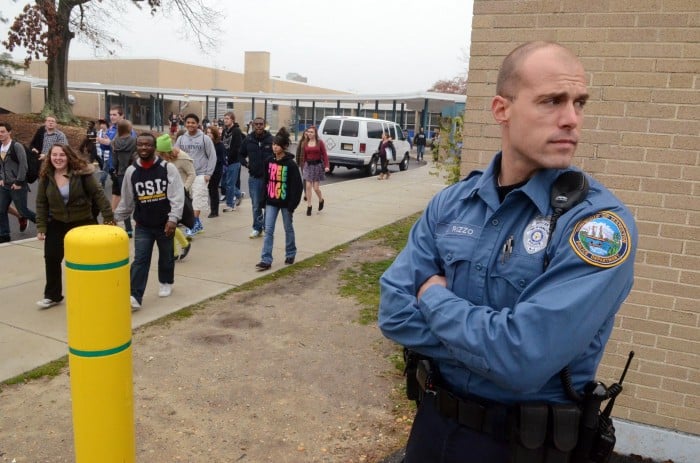 More schools than ever now have the constant presence of a police officer on campus to stand as the first line of defense against any threat. These officers patrol school grounds looking for signs of illegal activity involving drugs, weapons and other forms of criminal activity. In addition to these duties, the officers get to know the students and teachers so they are better able to tell if someone isn’t acting like themselves and needs help. Most school systems gain the services of resource officers through state and federal grants, so funding these positions is vital to make the best security options available to school systems.

Many of today’s schools are being built with advanced audio detection systems to guard against break-ins through ceilings, windows and doors. When unusual sound is detected, it is sent to an operations center for analysis and to have the proper authorities contacted if needed. Vandals, thieves and trespassers should have a much harder time inflicting harm in schools equipped with these systems.

The first goal of any school is to stop a potential intruder from entering the building. To do so, the school must have adequate access control systems in place to ensure only authorized personnel and students are allowed entrance to the building. Examples of access control systems include automatic locking doors, bulletproof windows, intercom systems at entrances, guard stations at campus entrances to check for identification and other means to keep those with harmful intentions away.

A picture is worth a thousand words, and schools with video surveillance systems in place often report lower incidents of vandalism, theft and assault. Many types of these systems are available including daytime, nighttime, emergency-only and alarm-activated systems. Monitors are usually set up in a school’s main office or security office to allow staff to monitor happenings across campus. Most systems are equipped with recording features, allowing authorities to view tapes when attempting to find suspects or to better understand who did what during a struggle or break-in.

While schools have traditional fire alarms for people to pull in times of trouble, more of today’s schools are opting to take their protection to a new level by contracting with security companies for around-the-clock monitoring. Schools today are guarding not only against the threat of fire but also toxic gases, radiation and more. Systems being used include sprinkler systems, monitoring of heat and smoke detectors and temperature control.

To guard against the possibility of guns, knives and other weapons being smuggled into school buildings metal detectors are now commonplace in most schools. Especially within inner-city schools where gang activity can be of concern, students must pass through metal detectors at school entrances to ensure they have nothing illegal on them. However, today these devices are used in areas big and small, since no town in America can safely say that disaster will never strike them.

Drugs such as marijuana, cocaine and meth continue to present schools with an array of problems. To combat against this, many schools use the services of drug-sniffing dogs to sweep schools for these and other drugs. Local police departments are more than willing to pay surprise visits to schools to help with this problem, using their dogs to keep schools drug-free zones.

More classrooms and offices are being built with panic buttons as part of the décor. Like offices and other areas in prisons as well as banks, schools can have panic buttons installed that when pushed send an emergency notification to police or security personnel. These buttons can provide peace of mind and potentially save lives when utilized correctly.

Using a combination of these systems in schools will help to greatly reduce the chance of a tragedy occurring on school grounds, letting students and staff concentrate on learning rather than worrying.

Austin Faux works for ASG Home Alarm Security.  I’m usually glued to the computer and researching the latest security issues to write about.  But when I’m home I’m helping my beautiful wife, playing with my wonderful kids, and messing around on my nerd podcast, “I Am A Super Nerd.”  Find me on Google+.