Some confusion exists as to the proper naming of the rifling ceremony performed at military funerals of deceased member of the United States Armed Forces. Laymen often refer to the tradition as the “21-Gun Salute”, however this is inaccurate. In militaristic terms, a “gun” refers to a very high caliber, non-hand-held weapon such as an artillery piece or naval cannon. The 21-Gun Salute is a highly prestigious ceremony performed for incoming and outgoing Presidents of the United States, a Presidential death, or for heads of other governments, existing monarchs, and Chiefs of State. This typically occurs in Washington D.C. or Arlington Cemetery, and is a highly revered national event. 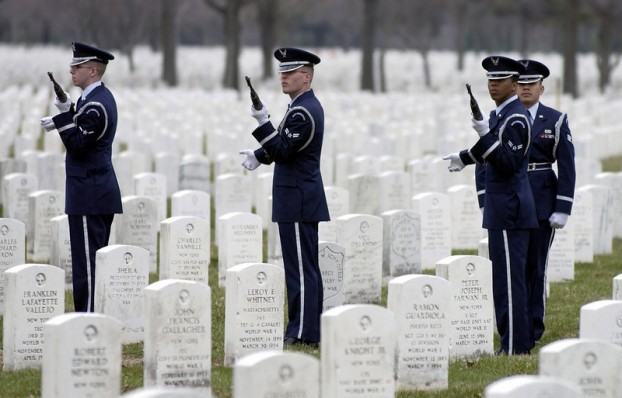 What is a Three-Volley Salute?

A Three-Volley Salute occurs at the request of the family of any honorably discharged veteran, military retiree, or active duty personnel. Per the availability of an honor guard team, three rounds of rifle fire occur towards the conclusion of the burial ceremony. A firing team can comprise any number of individuals, but the standard formation includes eight riflemen, with a noncommissioned officer giving orders and leading the detail. Regardless of how many members of the team are present, each member always fires three rounds (known as volleys).

Regarding the number of volleys, this tradition originates from the first American wars where muskets and other firearms were used. After a day of battle, the field would be littered with recent dead. The two warring parties would cease fire and other hostilities, and allow one another to honorably collect their dead and wounded. Care would be given to those injured in combat, and those who had fallen would be either buried or prepared for future burial. Upon completion of this clearing, a side would fire three volleys, signaling to their enemies that they were now prepared to resume combat.

How far back does this Tradition go?

The origin of both gun and rifle salutes trace back to primitive warriors showing instances of peaceful intent by positioning their weapons in such a way that it rendered themselves unready for combat. Historians agree that such a custom was universal, and that lowering a weapon to a position of ineffectiveness allowing opponents to interact peaceably for a specified time period. Even ancient African warrior tribes were known to point their spearheads away from the enemy and into the ground when signaling a desire for non-hostile interactions. This is why the Three-Volley and 21-Gun Salutes are done with their weapons aimed far away into the distance; an act of temporary peace is being displayed to all those who are present.

Why are there Three-Volley Salutes Today?

Anyone who has attended a military funeral can attest to the honor and meaning that is found at such an event. A formal ceremony such as a Three-Volley Salute is the Armed Forces’, as representative of a grateful United States, way of paying final respects, and thanking an individual and family for their service to our country. For those who are eligible, do not pass up the opportunity to make an honor guard team a central part of a loved one’s passing and being put to rest.

Written by Clif, a freelance writer for SereniCare Funeral Homes in Arizona. We are a full-service, customer service based home in the Phoenix area.