When many people think of the brand Casio they see before them an image of that wonderful F-91W model, that during one era, everyone seemed to own. The people who owned this watch loved it, and the ones who didn’t own one wanted one. Some items summarize, just by hearing them or by seeing them, an era. This model of Casio watch is one of the memory provoking images of the 90’s. Its success was based on a number of different reasons. Most things that are successful are ever based on just one or two reasons alone. The F-91W was an inexpensive watch that seemed indestructible. In fact, I think it was. It was a low maintenance watch. It’s battery life was an estimated seven years, and, during the 90’s they were championing the digital watch. 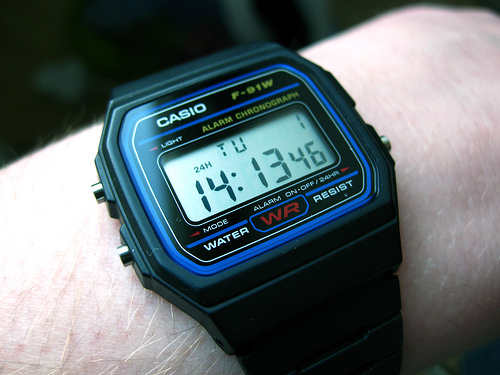 Digital watches (the term in Danish is digitale ure) were in fashion, and this was because of Casio. Another reason for their popularity was its strange partnership with the assumption that the watches were cool. Casio made great efforts for their watch to not be cool, but this is precisely what made them cool. The more that a spokesperson from Casio said that this watch wasn’t cool – which was something that they did a number of times – the watch became twice as cool. It was almost comical really.

Some people, of course, chose this model of watch because of its great functionality, but it appealed to those with an eye for fashion and trendiness equally. This had to have been an accident, and no company could ever plan something so perfect, but this inexpensive and plain watch became ideal for everyone. They surely had never dreamed it would have become so popular, but it did, and it launched Casio into another world. The brand continued and has prospered since those heady days.

Heady days that are now retro in comparison to the selection of watches now available by Casio. The new range of watches until the branded wing of G-Shock show how Casio has grown these new branches from the same philosophy of the F-91W. They have their focus very much pointed towards the functionality of a watch before anything else. The Casio designers believe that this is more important than any other feature. The G-Shock models claim to be the strongest watch ever built. They are the preferred choice of watch for mountain climbers, police, fireman, and astronauts.

The G-Shock is pleasant to look at as well though, with it being the preferred choice for many people who don’t require a heavy duty watch. The strength of the watch comes as a secondary advantage to them, behind the fact that they think it looks good on their wrists. Casio are one of those brands who unashamedly release products – and right so – that function is a far more important quality than fashion. Fashion is a flexible concept. When one really thinks about it, the word means nothing. If a good watch is made and people start wearing it then it is fashionable by those standards, and not by the false and fleeting imitating of trends.

To find Casio watches (in Danish Casio ure) at an affordable price, follow this link.