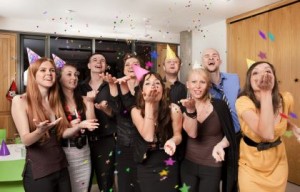 Company parties have such a wide range of success and failure- from mandatory torture to fun release of workplace tension. What makes a company party a success or dooms it to failure? While a lot has to do with pre-existing office politics, there are some things a party planner can do to ensure it goes well.

Some companies get embroiled in the debate between having an adult event versus a more wholesome one. This is not the right tone for debate of whether to serve alcohol. Assuming that employees will abuse alcohol and need to be limited or kept away from it creates a “nanny” atmosphere which doesn’t lend itself to a good party. It is not the presence or absence of alcohol which sets the tone of a party, but the atmosphere of reproach and self-consciousness that the decision not to serve alcohol may create. Part of a successful company party is escaping the “boss is watching” mindset.

It’s inevitable that people forget names, so put a table at the entrance and tell everyone to grab a name tag. This may seem like a small thing, but having name tags means that people who have only spoken once or twice will feel confident addressing each other, rather than awkward. It promotes mixing with people outside the normal clique.

Too much structure can make a company event boring, but a little goes a long way toward encouraging socialization. If a dinner is being served at the event, consider assigning seats only for that portion of the party. Having a team building or introductory exercise with a new group of people can make the rest of the night much more enjoyable. However, avoid forcing interaction beyond the first 30 minutes or hour or people who aren’t having a good time will start sneaking out.

Assign Based on Interests

Randomly meeting another employee at a party and then never interacting with them again is rather useless in terms of company morale. The goal is to increase friendship or introduce people who will have chances to work with each other in the future. Organize groups and tables by department or interest. If there are several teams working on similar projects within the company, mix up members of each for the party.

Structure at the Start

To complement a mixer or assigned seats, some sort of introductory activity can serve as ice breaker between employees who haven’t been introduced. Provide a structure for people to fall back on if they are uncomfortable in the social situation. This could be as simple as a paper on each table with interesting questions each person must answer. Some groups will do the activity, others won’t, and that is fine.

No matter what is decided, management must lead with a stellar attitude. If the managers are acting grouchy or are obviously only there for face time- the party will fail. Managers need to set an example, even if it requires a meeting to get everyone on board. Tell managers what the activities will be beforehand, and try to scatter them. Do not place managers with their direct subordinates.