Rising costs in office space are prompting companies to look for innovative ways to store essential documents in a space efficient way. Recently there has been a trend towards scanning and storing vast amounts of documents on digital storage, either locally or in the cloud. For many companies this has solved the dilemma and freed up office space for other uses. However, whilst many documents can be stored in digital form, some industries such as the legal profession and medicine still require hard copies of their documents. Government institutions also can accumulate documents which require long term storage while struggling with storage in city centre premises.

This has led to the rise of mobile racking and mobile shelving storage solutions. Normally runningalong tracks in the floor, mobile shelving can be motorised or manual. By moving the shelving to allow access, the wasted space is removed and more storage units can be added. This has resulted in the phrase “High Density Storage” to describe this range of products. 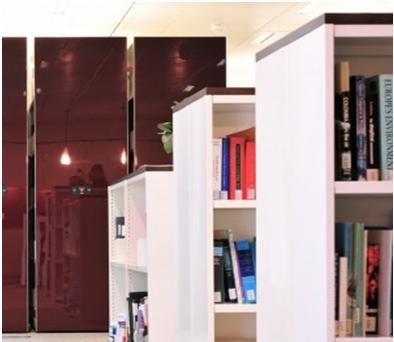 When we went to a demonstration of mobile racking we were impressed at how this type of racking looks very futuristic, especially the automated version which moves at a touch of a button. The automated storage requires a logic board to control all the units so they move together rather than push each other out of the way. A user selects a storage bay, and at the touch of a button the units separate to form an access path between the two sections. This happens quickly and efficiently, with the racks sliding along tracks in the floor. When the archivist has finished, at a touch of the button the units close up again. Effectively, you are reducing the space needed between units, removing the access path and only adding it back at the required time.

Some vendors include locks or digital locks to restrict access to certain “joins” in the shelving. By requiring a code to separate the shelving at that point documents are kept securely.

A UK based company called Rackline produce a system called Power track. They state that their product “has all the sophisticated programmable logic controls you would expect from the latest hi-tech system, but it combines this technology with the simplest operator controls imaginable. In normal operation, the operator simply presses “Green for Go” and all controls and operations are handled automatically by the logic controls.” This type of high tech option can include features like timed access which stops access to the files out of office hours and auto close in case of a fire alarm to protect documents from fire and the sprinkler system.

It is true that mobile racking storage has higher set up costs, but it does reduce the space needed which can be a big cost saver for companies in city centre locations.

Whether in the 21st century we can solve the problem of overcrowded and cramped cities or not, there will always be people looking for innovation to buy back space and de-clutter our working areas. Mobile storage to remove the clutter of archiving is an excellent place to start.

With thanks to Rackline for technical information on office storage and office shelving.