Since 2009 Ford has been producing EcoBoost branded engines, these engines consist of a family of turbocharged, direct-injected gasoline engines. This engine is also co-developed by the German company FEV engineering. 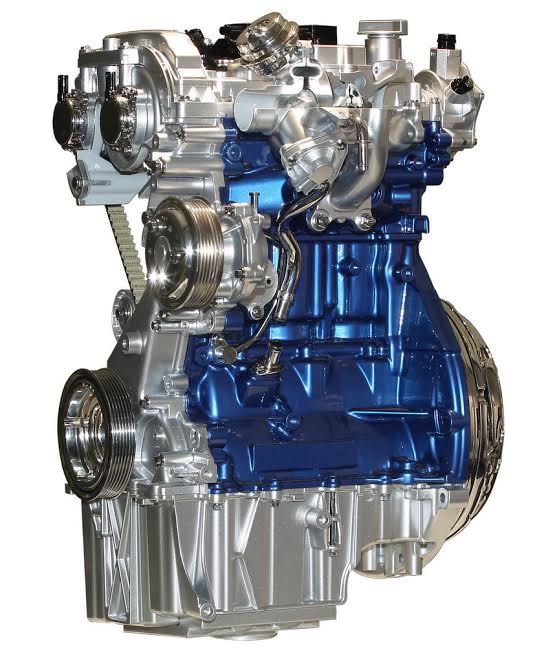 Ford’s EcoBoost engines are designed to deliver horsepower and torque close to, if not surpassing, those of their previous generation, much larger displacement, naturally aspirated engines.

Ford envisions these engines as being more suitable than mixed hybrid technology for the next generation of petrol / gasoline engines due to their much lower cost, along with being more versatile by retaining the majority of previous generation engine electronic and mechanical components.

Ford sees these advantages as superior compared to proceeding to develop hybrids and improve diesel engine technologies at the current time. Due to this vision, Ford uses EcoBoost extensively across a very broad range of vehicle product lines, including as replacement for previously used diesel turbo technologies in some vehicles, while others it exists as an option to the buyer.

The most successful version of EcoBoost engine currently available is the 1.0 Litre turbocharged inline three cylinder engines. Currently two variants have been initially built, one 74kW (99hp) variant and another 88-92kw (118-123hp) version. The more powerful version delivers a maximum of 170Nm of torque and 200Nm on over-boost, which dramatically increases turbocharger boost across the rpm range of 1400-4500rpm.

A performance orientated 103kw (138hp) version has also been released in the Fiesta Red and Black Edition, with 210 Nm of torque.

The block of these engines is made with cast iron, which provides superior strength and 50% faster warming to operating temperature from cold start compared to aluminium and alloy blocks, the downside of this is iron considerably increases the weight of the engine block, a reason why iron block engines were abandoned by many manufacturers over the last decade, their strength however compared to alloy is considered by many, including Ford, to be much better suited to high boost turbocharged applications.

Ford’s Chief engineer, Steve Gill, considers the 1.0-L three cylinder engine as a major breakthrough for Ford which he is highly proud of, especially in 3 key areas of development. The first being efforts made in the flywheel design to compensate and harmonise the natural unbalance of three cylinder engines.

Moreover, The engine uses an internally based timing belt, different from conventional engines with front edge, primarily externally mounted timing belts / chains, the EcoBoost belt is designed to sit further inside the engine, running lubrication directly from the main supply of engine oil, using this slightly different method, engineers at Ford found that this can enhance lifespan and efficiency while eliminating timing belt squeak and noise. This unconventional belt also does not need replacement and is completely maintenance free.

Finally the Ford EcoBoost 1.0-L engine has an exhaust manifold cast into the cylinder head, reducing warm up times and is water cooled via the main engine blocks cooling system.

Something also worth taking into consideration is the size of this engine, the engine block is absolutely tiny, at a size of less than 30cm length and width, and a height of around 21cm. All components inside the engine are also specially coated to reduce friction in the engine, meaning this motorcycle sized engine can sustain prolonged usage far beyond the lifespan of most other engines of the same size, and should have a lifespan the same or longer than current and past conventional engines.

Ford first introduced engines which were geared towards the EcoBoost model in the 2013 Ford Fiesta, although these engines were naturally aspirated and produced a tiny 48kw (65hp) and 60kw (80hp), both engines used technology which would later become standard to the EcoBoost turbocharged platform, such as direct injection and Ti-VCT, standing for Twin Independent Variable Camshaft Timing, this technology allows the ECU to advance or retard timing independently upon the intake and exhaust camshafts. Further technology retained for use in the EcoBoost platform is the start- stop technology to further improve fuel economy.

Ford’s EcoBoost technologies have also expanded into their small truck range, the Ford F-150 was revised with more aluminium parts used in construction to save weight, before being equipped with a twin turbo 2.7 Litre 60 degree angled V6 EcoBoost engine. This engine delivers a moderate 325hp(242kW) with 375lb.ft (508Nm) of torque. Ford invested half a billion dollars in the Lima Ford Engine Plant in order to develop this new engine. Also available as an option is the 3.0L twin turbo or 3.5L TwinForce engines, designed to deliver power and torque equivalent to a typical 6.0L or larger V8 engine, while also offering 15% better fuel economy to the V8 counterparts.

Looking forward, the Ford MKR concept engine is rated at 415hp(309kW) and 400lb.ft (542Nm) of torque, running on E-85 (85% Ethanol Fuel). The fuel delivery of this engine utilises an extremely high fuel pressure of up to 2150psi, with the power being delivered via two specially built Borg Warner turbochargers which can spin up to 170,000 rpm and provide 12psi of boost.